I like to understand the organizational relationships, both horizontally and vertically, of the subject. Besides, I thought this was a task that I had nearly completed. Little did I realize how convoluted and entangled the relationships were between the Police units (C.M.P.C., Dominion, R.N.W.M.P) and the ministries. Furthermore, some positions, like the Minister of Aviation, I haven’t been able to verify. With that, here is a look at the relationships between the Ministries and Policing elements of Canada and the Military Services Act, 1917.

The point of Richard Holt’s book, “Filling the Ranks”, is the modernization of the Canadian Military, specifically Canadian Army. The book provides fascinating insights into the recruitment, training, and reinforcement of the Canadian Expeditionary Force (C.E.F.) from 1914 until 1918. Holt is only able to lightly touch on a few subjects related to modernization, like enforcement and the anti-conscription riots, which gives people like me a chance to flush out some missing pieces.

As the United States’ first “total war” conflict was the Civil War, Canada’s first “total war” conflict was World War I. Now, I admit that I am correctly and *incorrectly* using (abusing) the term “total war”. Broadly speaking, “Total war” is defined by an “unrestricted warfare” that can ignore accepted rules of Warfare, e.g. Sherman’s March to the Sea. However, I like to think of “total war” as the complete engagement of national resources to achieve a strategic (political) goal against an external entity. To be fair, there may already be a term for this definition, but let’s go with this for now.

WWI required Canada to modernize its thinking and organizational structures in order to support large scale conflict. The United States learned many of these lessons during the its Civil War. As Holt points out, Canada learns them over the course of WWI. Here are the organizational alignments of federal police units in 1914 (war’s beginning) and 1918 (war’s end): 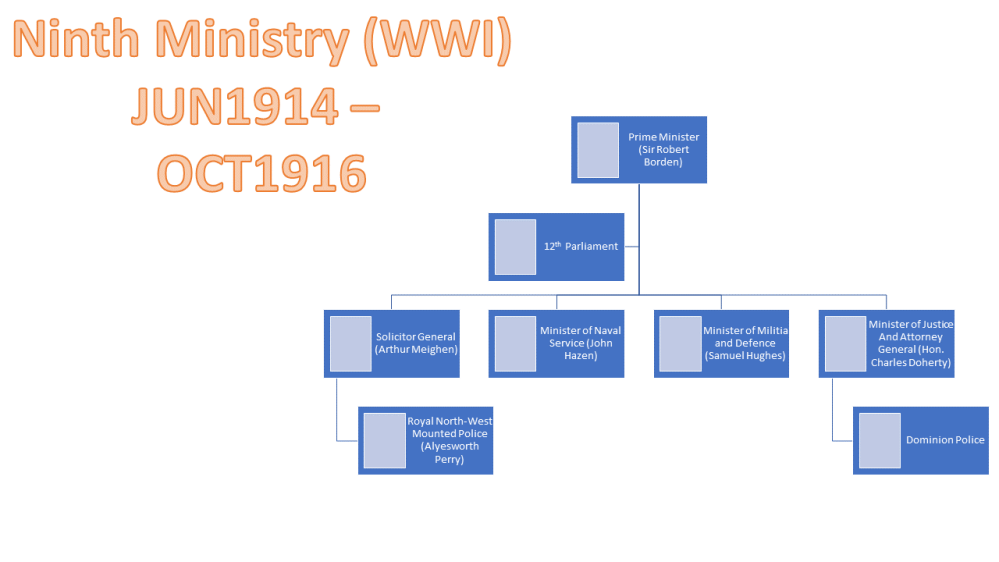 By the war’s end, there are some pretty significant shifts. In particular to the Canadian Military Police Corps, the shift of the Special Dominion Police to the C.M.P.C. is pretty significant because it kind of recognizes that recruitment should have been overseen by the military. (NOTE: The Military Service Act and conscription was overseen by the Department of Justice, a civilian entity, rather than the Ministry of Militia and Defence. The Ministry of Militia and Defence maintained oversight of volunteer recruits throughout the entire war.)

Another big shift is the bureaucracy, which made it difficult to understand inter-ministry and inter-department relationships. Because the increased bureaucracy wasn’t preplanned, there were a lot of shifts, especially in the winter of 1917-1918 and spring of 1918 as war was expected to be protracted. The shift of the Special Dominion Police to the Civilian Branch of the CMPC changed administrative functions but not legal authorities. According to the Report on Operations of the M.S.A., it appears that the Civilian Branch of the CMPC stilled answered and reported to the Military Service Branch for conscription enforcement despite being shifted to the Provost Marshal, who reported to the Minister of Militia and Defence. Furthermore, relationships were not clear between the Assistant Provost Marshals and the Provost Marshal.

One of my unanswered questions is whether or not the Assistant Provost Marshals and assigned personnel received training at Rockcliffe prior to assignment. I recognize that there were forces assigned to security functions prior to the creation of the Provost Marshal and the CMPC.

Oddly enough, Canada would have to learn these organizational lessons again at the start of WWII. All military police, with exception of the Royal Canadian Navy and Royal Canadian Air Force, were disbanded by 1920. Statute 7-8 Geo. V, a Order of Council dated 31 Oct 1916, contained a self-termination clause for basically all war measures enacted, as I understand it. This self-termination clause gutted much of the military. Thankfully, the recreation of the military police (Canadian Provost Corps) didn’t require another three years.