Over the course of the past year or so, many puzzles and rabbit holes presented themselves to me. In the most recent post on John Hutchinson, the West Roxbury VA hospital requested military service verification in 1963. John Hutchinson died in 1956. Fold3 indexed several other records of a John Hutchinson born in Massachusetts on July 20, 1891 who died in May, 1978. Who was this second John Hutchinson that might have served in the U.S. Navy and needed medical attention in 1963. Regardless of the answer, this is not the puzzle box that spawned this blog post.

I attempted to verify Ralph Winsor‘s claim that he was Officer-in-Charge (OIC) of the First Naval District’s Office of Naval Intelligence (ONI). During that [ongoing] attempt to verify, I uncovered a November 10, 1922 memorandum from the U.S. Naval Attache in Chile to Director of Naval Intelligence.

The memo identified a Japanese woman, Iwo Horiguche, involved in the suicide of Lionel Ryder, Secretary to the U.S. Ambassador.  While the memo mentioned Ryder’s last name, it mainly focused on Horiguche describing her as attractive, well-cultured and fluent in five languages. Finally, she was the guest of the Japanese Charge d’Affaires and his wife. The memo goes on to state that the Ryder was likely betraying secrets to her.

NOTE: Horiguche is likely incorrect. “Che” is not native to Japanese, but “Chi” is. The most common kanji for the Horiguchi surname/family name is 堀口.

Wondering more about the background, the Chicago Tribune ran a small note on October 17. Unfortunately, there is not a lot there. In the July 1922 Annual Report on Naval Attache activities, the Buenos Aires office was “active in uncovering activities of the British-Japanese espionage service in South America and United States.” Espionage rarely happens in a vacuum.

Starting in 1921, the U.S. State Department assisted in the (February) 1922 Shantung Treaty negotiations between Japan and China. Considering WWI fallout, this treaty resulted in the transfer of Shantung/Shandong from Germany to Japan to China. Obviously, Japan felt it important to know as much as possible regarding the US’s negotiation stances, even if it came from sources who were not directly involved. But why Brazil.

Japanese began moving to Brazil since 1908. Oddly enough, Japan experienced famine and overpopulation around the turn of the century, especially in Okinawa. Many Japanese went to United States (Hawaii and California). Just as the United States started restricting Asian immigration, Brazil became open as they clamped down on immigration from African countries and those of “black descent”. To this day, São Paulo still has a large Japanese-Brazilian population.

In 1923, the Naval Attache conducted a detailed investigation into how each station handled codes and ciphers. The questionnaire covered foreign national staff, like cleaning crew, storage of cryptographic material, and decrypted message handling. The investigation identified Rome, London and Tokyo as high risk areas for encrypted Naval Attache message traffic interception and compromise. The final report was presented on September 1923 with instructions to every out station.

Unfortunately, I have no more information regarding this strange tale. Lionel Ryder could have started spying much earlier than 1922. I doubt Iwo Horiguche/Horiguchi was her real name. Furthermore, she could have murdered Lionel and the suicide a cover story by the United States. Does a random newspaper clipping, a single memo, and an investigation into Naval Attache ciphers really lead to an uncovered intelligence coup? May be one day I’ll find out. 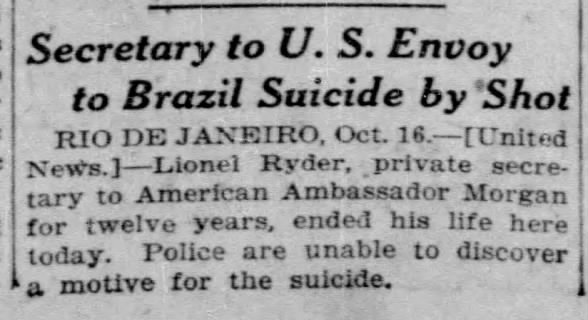