Raymond “Raymie” Nelson Skilton typifies the fallen athlete hero. A star player from high school whose infamy grew as his fame departed. Perhaps, these simplified story lines belie a more complicated man. Or, maybe, the truth is as simple and direct as the man appeared to be.

Raymie’s illustrious hockey activities started as a Rindge Manual Training School goalie in 1905. He switched to defense in 1907. This position change was not a drastic change unlike the same shift in modern-era hockey. The early goalie was a normal player with no extra padding and strict rules. When the goalie got hurt, another player would simply step into the crease. If his later years reflect his youth, Raymie sought action and created it when missing. The static position of goalie probably clashed with Raymie’s innate personality.

Raymie shone as an early-era hockey “offensive defenseman”. Between the checking and scoring, Raymie led teams to victory. During the 1917-18 USNAHL season, he scored 11 goals in 11 games. During the height of his career, he typically averaged around a goal a game, which places him in contention with other forwards of his era.

Raymie did not limit himself to hockey, though. The Boston Globe named Raymie as Boston’s “Best All-Round Athlete” in 1916. The articled listed football, baseball, swimming, and horseback feats and accomplishments. Raymie played football and baseball in high school. At the time, ice hockey was a minor sport and played in the off-season between football and baseball. Raymie’s skill with horses possibly developed during his time with the Massachusetts Volunteer Militia (MVM). Raymie was actively engaged across a spectrum of sports until the early 1920s.

Raymie changed during the war years, but not because of war itself. Raymie seemed to run from war and leaving Massachusetts. Newspapers pondered the fate of local amateur sports if the MVM sallied forth for the Mexican Punitive Expedition. Raymie let his enlistment expire. When the U.S. Navy activated him, Raymie requested deferment due to economic hardship. The public figure of post-war Raymie struck a tarnished and exposed figure compared to pre-war Skilton.

Raymie’s hockey career ran into a brick wall after getting blacklisted by the Boston Athletic Association (BAA) in 1921. Raymie recruited three Canadians for the Shoe Trades club of the U.S. Amateur Hockey Association. Later, Irving Small revealed that amateur and Olympic athletes would be paid via cigarette tins. A practice fairly common in the New York amateur hockey scene in the 1900s and 10s. The ban was reversed before the start of the 1922 season, and he resumed playing.

This was only one of the many troubles experienced by Raymie Skilton in the post-war years. Court cases for verbally assaulting police officers, reckless driving and vehicular manslaughter assailed Raymie in the 20s. While the courts acquitted him, more legal troubles awaited him in the 30s.

Having lost his leather import business, he worked for a small company called Telenar Corporation in the 40s and 50s. Despite a seemingly quiet time during the 40s, the lawsuits and legal troubles renewed after he acquired patents related to a new metal production process called cold-flow processing. During the months long and very public legal process, he was even accused of offering the patents to Communists in a Mccarthy-era attack.

For all the commotion, Raymie Skilton passed away without much public notice on July 1, 1961. His passing caught the Boston Globe off-guard. They did not report it until February 1962. Eight months later! However, I don’t think the oversight diminishes his accomplishments as one of the first prominent, America-born Offensive Defensemen. 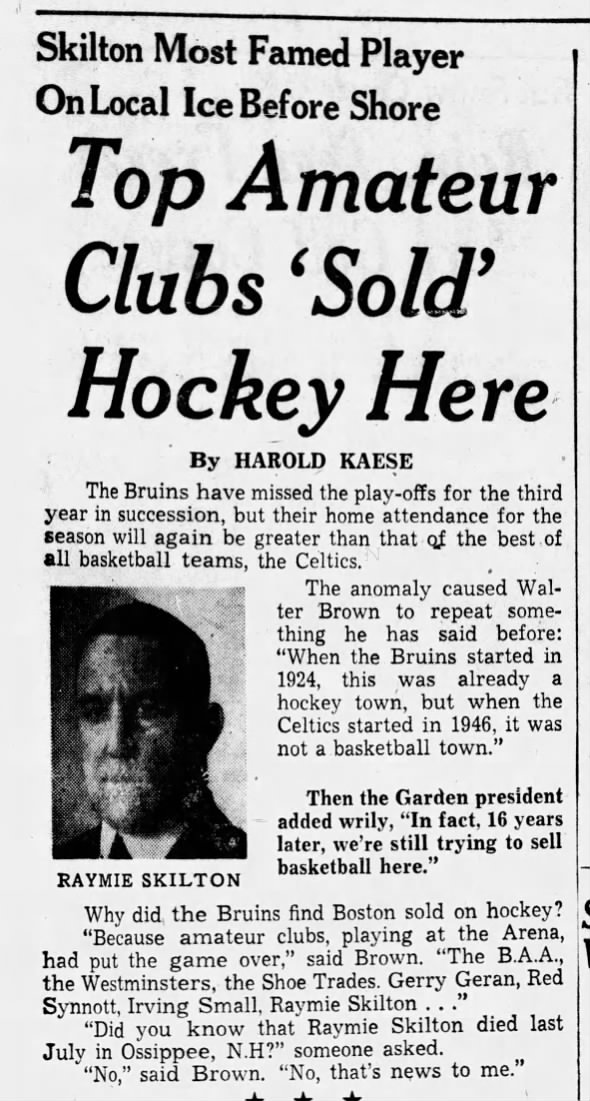