A rebellious Cornelius Fellowes Jr. hid an unrestrained private life within a very boisterous public life. Descendant from colonial family lines, Cornelius entered into his father’s business, horse racing, possibly more from envy than following tradition. When Cornelius Sr. found out about the marriage to Nathalie Rogers, Senior disinherited Junior and cut off all support. As if in an American fairy tale, Nathalie, and by extension Cornelius Jr., inherited a quarter of million dollars from a deceased uncle in Paris. The unreported marriage, disavowal and windfall  were just the start of Cornelius’ tumultuous adult life.

Cornelius Fellowes Jr. was born to a horse racing magnate in Brooklyn, 1879. Cornelius came into adulthood with a true love, news story that was more about the senior socialite than the son. Written as a socialite intrigue piece, Cornelius quietly eloped with Nathalie Rogers, the daughter of a Philadelphia merchant, “over a year ago” as of June 1900. Between a secretive marriage and possibly acquiring goods under false pretense, Senior disowned Cornelius in June 1900. Fortunately, the death of an uncle depraves Cornelius Senior from punishing his son. True love trumps over money and arranged marriage. But, this isn’t the end of this story.

The article hints at an indecent indiscretion of Young Fellowes. While only hinted at, Cornelius probably got married around 1895 or 1896 at the age of 16 or 17. Nathalie would have been approximately 14 or 15, and quite possibly with their first child, William Fellowes. Although 16 is too young for 1890s New York, it is the legal age for Pennsylvania. When the story was published, Cornelius fathered three children with Nathalie, William, Gertrude, and Celia. The lack of documentation and abbreviating his name for the 1905 census demonstrates Cornelius’ efforts to separate his private life from his public profile.

To reinforce the concept, Cornelius’ divorce and remarriage lacked documentation just like his marriage to Nathalie. When reporters inquired Mademoiselle (mlle) Dazie about her marriage, she remarked that friends knew, but was surprised that the news had not leaked out before. The article from the Brooklyn Daily Eagle posted in March 1914. Unlike with Nathalie, no records seem to exist that indicate children between Cornelius and Dazie. Until about 1920, reporters detailed Cornelius Fellowes’ bankruptcies, various dealings and even a suspicious death. Afterwards, the news seem to focus solely on his sporting enterprises. When he passes in August 1957, a small blurb in the New York Times reminds us of how he failed to secure  the great horse “Man o’ War” by a hundred dollars.

Despite all the high profile drama, Cornelius Fellowes Jr. played a significant role in the National Amateur Hockey League. For starters, he sponsored the Fellowes Challenge Cup. That cup symbolized the U.S. national amateur hockey champions until 1926. He managed the St. Nicholas Rink from 1905 until 1920. Additionally, he ran the Wanderers of New York. As a rink and team owner, he was a hand behind the professional as amateurs in that role. Between Cornelius, George Brown, and Roy Schooley, they would forge a hockey powerhouse that would carry to two Olympic silver medals and rival even the Canadian teams. 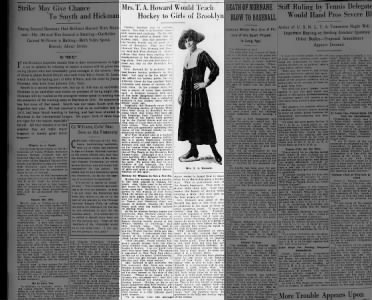 END_OF_DOCUMENT_TOKEN_TO_BE_REPLACED

Attempting to repeat 1895, the Winnipeg Jets are trying to upset strong favorites in order to win the 2018 Stanley Cup. In Dec 1895, the Winnipeg Victorias amateur hockey club bested Montreal to secure the cup with a team that became known as “the Winnipeg Seven”. While some fame befell the Winnipeg Seven, Thomas Acheson “Attie” Howard stands out due to his very publicized move to Yale. However, hockey was a family affair for the Howards.

While Thomas Howard’s journey started in 1871, not much was able to be discovered about his early years. Tom’s first appearance is an unassuming marriage announcement to Kathleen Cronn in the May 1893 edition of the Winnipeg Tribune. A couple of years later, Thomas Howard, Jr. came into the world in 1895. Finally, Jack T. Howard completed hockey’s royal family in 1897.

The list of Tom’s accomplishments only started with winning Lord Stanley’s “Challenge Cup” in Dec 1895. In 1899, Tom agreed to become Yale’s head coach of Men’s Ice Hockey. In the 20’s, he joined Spalding to sell sticks and become the editor of Spalding Official Ice Hockey Guide, an almanac on hockey and winter sports. By 1927, Tom and Kathleen retired to Tom Jr’s place in Los Angeles. A lone obituary in the Winnipeg Tribune on 30 Nov, 1945 noted the passing of Tom “Attie” Howard on the 18th. But, this wouldn’t be a story on family if it was only about Tom.

In New York City, Kathleen Howard came into her own as possibly hockey’s first female coach. Noted as “Mrs. Tom Howard” in most newspaper articles, she argued that hockey was for women. Mrs. Howard clearly coached the St. Nick’s Reds throughout the teens. It’s not clear when things changed.

In April 1918, Kathleen organized a hockey match between St. Nick’s and a Boston team with all proceeds going to the employees of the Brooklyn Ice Palace. The Brooklyn Ice Palace created ice using a mechanical process and ammonia. A State Ice Controller ordered the ice rink to close to save materials for the war effort. While the Brooklyn Ice Palace eventually reopened and the St. Nick’s Reds started playing again, Mrs. Howard seemed to fade into the background. She moved to California with her husband and passed away in 1954.

Newspapers gushed over Tom and Kathleen’s kids, Tom Jr. and Jack. From all accounts, Tom limited Junior’s playing due to a possible heart condition. When Tom Jr played, commentators praised his ability. Unfortunately, few articles mention Jack. One of Jack’s last mentions was in an article about how he and his brother played for a Boston amateur team in the mid-20s.

In the midst of the twenties, Tom Jr. married Natalie Matthews. They eventually move to Los Angeles, where they end up taking care of their parents. Tom H. Howard possibly passes away in the 60s, but Natalie lived until 92 (1987).

This only touched upon highlights of, possibly, the first royal family of hockey. Most amazingly is the story of Kathleen Howard. She brought the tradition of women’s hockey from Canada to New York City and Boston. She started a team and organized games. She, quite possibly, was the first female hockey coach in the United States.

Unfortunately, deep mysteries abound. What happened to Jack/John T Howard after Boston? Did Tom Jr. and Natalie have children? For now, the Winnipeg Jets have a chance again to go for the Cup, and recreate the magic of the 1895 Winnipeg Victorias.

While looking for more information on professional hockey players who served in WWI, a New York Times article on Girl’s hockey was buried in the search results. The article, “Girl’s hockey in brooklyn tonight”, stated that Mrs. Tom Howard would lead an exhibition game and other activities in support of the Ice Rink’s (Brooklyn Ice Palace) employees. The game occurred on April 13th, 1917.  The rink closed on the 14th. Although the news article didn’t explain, a Brooklyn Library blogger stated the rink was ordered to shut down to save on ammonia, which is used in creating artificial ice and munitions. But the information begged a bigger question. Who is Mrs. Tom Howard and How popular was women’s hockey in WWI.

Going back to the first question, Mrs. Thomas A. Howard hasn’t revealed herself, yet. Thomas Acheson “Attie” Howard is fairly well documented. A Stanley Cup winner with the Winnipeg Victorias, he moved to New York in 1899. He eventually ended up endorsing a hockey stick and writing a book on hockey and winter sports for Spaulding Co. He had two son, Thomas Jr. and Jack. Finally, he died in Los Angeles in 1945. In all of the documentation reviewed, there is only a “Howard, wife” (1920 New York Census) or Mrs. Thomas A. Howard (NYT, April 13 1917). Even his death certificate doesn’t list his wife or sons. For now, the mystery of Mrs. Thomas A. Howard remains. Hopefully, I’ll learn more about women’s hockey in uncovering her identity.