Saskatoon’s adopted, Dr. Edmund Burke Nagle, dedicated himself equally to dentistry and amateur sports, especially hockey. Born in Almonte, Canada, Eddie, as he’d become to be known, played football and hockey at St. Joseph High School in the early-1900s. However, it was in college where his athletic talents rose to fame.

Starting in November, 1910, Eddie enrolled in Ottawa College with newspapers declaring his right half-back position. However, he also continued to play the seven-man hockey. He starred at center and learned under Father Stanton. Additionally, he played alongside Dr. Francis Charles “Dink” Madden with whom he’d become fast friends.

Prior to Eddie’s graduation, he traveled to Battleford, Saskatechewan for part of the 1913/14 season. Battleford desired a Senior A hockey team. Eddie only played for the one season and returned to Ottawa. Although he’d travel to play in other locales, like Dunnville, those brief months in Battleford must have made an impression.

After graduating in 1915, he waited or took a break. He continued to play amateur sports with the Ottawa Club. In Fall 1915, he injured his foot playing football, which may have required an operation. The injury possibly caused him to change his mind on professional hockey. However, the discussions between the Aberdeens (Amateur) and Coach Alfred Smith of the professional Ottawa Senators. Or, may be, it was conversations with his long time friend, Dink Madden.

In 1915, the newspapers expected Eddie to attend McGill University like his friend Dink. Instead, Eddie spent the year wandering from 1915 until 1916. During this time, he managed the Aberdeen’s amateur hockey team. Also, he played amateur sports with Dink Madden. In November 1916, Eddie and Dink surprised Ottawa by moving to Pittsburgh.

Eddie and Dink attended University of Pittsburgh to study Dentistry. They played hockey with the city’s famous Pittsburgh All-Stars, or YellowJackets. During the 1917/18 season, they also played in the National Amateur Hockey League with the All-Stars. In May 1918, they received their draft notice from Canada. Unlike four of their colleagues who joined the U.S. Army, Eddie and Dink traveled back to Canada to enlist. They chose to take a commission in the Royal Navy as Surgeon Probationers.

Eddie reunited with Dink in Pittsburgh in 1919 in time for school and hockey season. They continued to play with the All-Stars. After hockey, war and other events, Eddie and Dink graduated as dentists in June 1920.

Eddie and Dink had at least one last adventure together. Dink traveled to Ottawa to be witness for Eddie’s marriage. On July 14, 1920, Eddie married Kathleen Shamon. While Dink returned to Pittsburgh, Eddie and Kathleen moved back to Saskatoon and Battleford.

After starting up his practice, Eddie remained active in amateur sports, especially hockey. He played into his final years of life for the School for the Deaf. Additionally, he became renowned in trapshooting. He and Kathleen loved travel. On a cruise ship near San Fransisco, Dr. Edmund Nagle passed away on June 24, 1966. Eddie Nagle left behind a legacy of sports, dedication and community.

Herbert “Herb” John Drury’s reality became about hockey leaving him rather than him leaving hockey. The Midland native became hockey greatness with an innate skill that challenged Hobey Baker for greatest American player of his day. However, time and injury slowed the hero. Although he attempted to become a referee, he failed to make the transitions necessary to remain attached to the sport. Despite an unceremonious end, Herb long remained the standard for comparing new players well after he passed.

The two-time Olympic Silver medalist skated into the world on March 2, 1896 in Midland, Ontario. After the 1915/16 season in Port Colbourne, he transitioned to St. Paul. However, he only briefly stayed. By the 1916/17, Roy Schooley convinced him to move to Pittsburgh.

For the next ten years, Herb dominated hockey. He played at the rover position in seven-man hockey. In seven-man hockey, all positions moved along fixed lines except the rover. The center is roughly an equivalent position in modern (six-man) hockey. The rover needed excellent skating skills to succeed. By all accounts, Herb darted around the enabling the wingers to score.

During next ten years, Herb starred on an all-star, all- Canadian team. They were called the Pittsburgh All-stars. Teammates included Joe and Larry McCormick and many others. They won three United States amateur hockey championships in seven seasons. When the Pittsburgh Yellow Jackets turn professional, Herb went with them.

Despite an explosive inaugural seasons, the Pittsburgh Pirates struggled in the NHL and they struggled financially. Additionally, Herb’s age started to show. He fell out of starting positions to Lionel Conacher and others. When the Pirates moved to Philadelphia, Herb moved with them. The Quakers struggled worse than in Pittsburgh. The Quakers unceremoniously and quietly dismissed Herb in mid-February 1931.

At the end of his playing career, Herb felt hockey owed him. However, that can be debated. He got at least one game as an NHL referee. He performed two years as a Pittsburgh area collegiate and amateur hockey referee. Finally, he participated in most of the Pittsburgh old-timers hockey games which gave exposure to his Oakmont restaurant.

While he attained glory on the ice, off-ice matters were more modest moderate. Herb worked as a mill wright prior to enlisting in WWI. After all the hockey and restaurant business matters, he returned to the steel industry. He eventually retired from U.S. Steel. In the late-20s, Herb married, but they divorced in the early-40s.  Herb’s address always seemed to be tied to another parent or relative. Additionally, Herb possibly suffered from concussions. All potential stressors on someone who just wanted to play hockey.

Herb died in a VA hospital on 30 July, 1965. When the press mocked his beer keg physique, he attempted to get back into shape. When hockey left him, he complained a bit and then moved on. However, they held him up as a standard to compare greatness. He never forgot them.

Research notes: Official US Government records and various databases attribute different middle names, birth, and death dates. An alternate middle name is Joseph. Common alternative birthdates include April 2, 1896, July 2, 1896, and even dates in years 1894 and 1895. Some of these dates are in official government documents indicating sloppy clerical work. The most common incorrect death date is July 1, 1965. 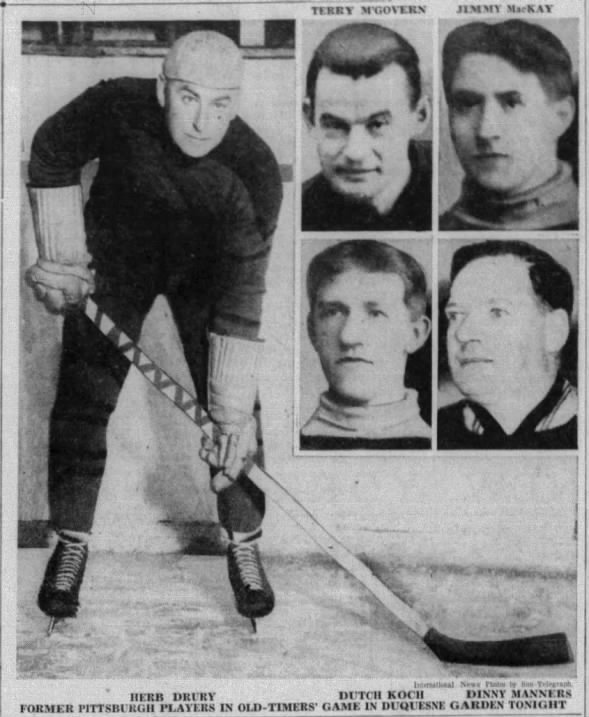 Lawrence “Larry” James McCormick left behind minor fame following his younger brother Joe to Pittsburgh.  Larry drove the Buckingham Seniors of the Lower Ottawa Valley League to three Maclaren Cups, 1907/08, 1912/13 and 1914/15. He captained the team during the 1914/15 run. For Larry, the decision to leave probably was more about supporting family and friends than chasing a cup.

The McCormick’s baptized their newest son, Larry, at St-Gregoire-de-Naziance in Buckingham, Quebec. Locked into tradition, Larry carried it with him throughout life.

Larry remained in Buckingham until 1915. Several factors possibly pushed, pulled or dragged Larry from Buckingham. During the summer, he, Joe and Ed Gorman, a 1927 Stanley Cup winner with the Ottawa Senators, left for Cleveland to play for Mr. Shannon. They quickly found themselves in Pittsburgh. Shannon ran afoul of the Ontario Hockey Association and the Canadian Amateur Hockey Association, who banned Cleveland’s team with claims of professionalism. As a result, the group found themselves trying out for the Pittsburgh teams in early January 1916. Roy Schooley picked them up for the Pittsburgh Athletic Association.

Buckingham and Pittsburgh recognized Larry’s shot and situational awareness. Newspapers from 1907 until the 20s commented on it. Roy declared Larry captain of the 1920 U.S. Men’s Olympic hockey team, which won silver.  Larry played one last season, 1921/22 before transitioning to coaching and refereeing.

Larry coached amateur Pittsburgh teams from the USAHA to the local club level. During his first season of coaching the YellowJackets, he got into an altercation with Canadian Soo player, Charley Boucher. Larry, as one of the two referees, penalized Boucher. Instead of heading to the bench, Boucher skated over to Larry. The Pittsburgh Press indicated Larry came out the better of the scrap. Whether fists flew or not, Larry personified hockey tradition.

Because Larry held-fast to amateurism, he worked as a car mechanic. His occupation in the war years was at Samson’s Motor Company. The employment ended with mobilization into the Army Motor Transport Corps along with teammates Joe McCormick, Herb Drury and Angus Baker. While he may have returned to work for Samson’s after the war, he found a new occupation, husband.

A scribbled note next to his baptism entry marks 19 July, 1921. Larry, much like his brother Joe, were practicing Catholics. Just after that date, Larry married Hazel Marie Chisholm. She probably did not like her first name. On drafts cards or military service compensation, Larry always wrote her name as “H. Marie”.

Around Roy’s death in November 1933, Larry and Marie started looking for a new place to settle. They were in New York for a bit in 1935. Larry came back to Pittsburgh for an old-timer’s game in February 1936. However, they found their home in Barnstable, Massachusetts. After a long illness, Larry passed away on 30 December, 1961 in Hyannis with services held at Our Lady of Victory. Marie’s journey continued until 7 November, 1980. 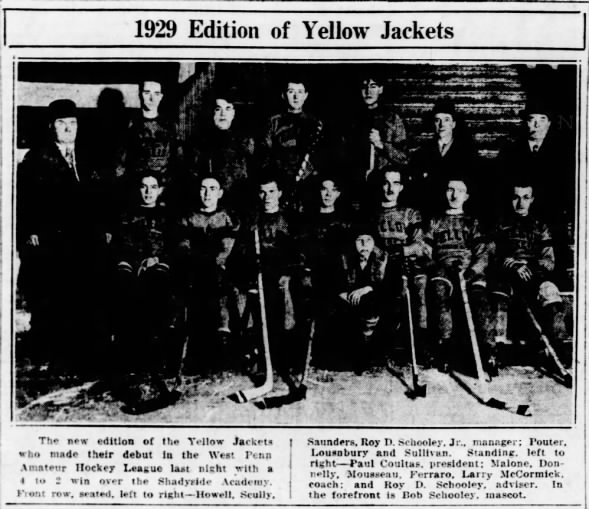 #. Pittsburgh Press, Ottawa Journal and others courtesy of Newspapers.com 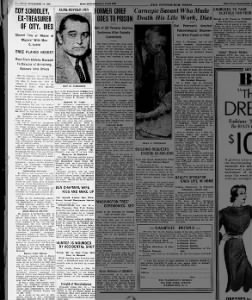