By the end of 1930, Thomas Atcheson “Attie” Howard became one of hockey’s most important forgotten legends. During his time in the limelight, hockey drastically changed from a predominantly amateur sport to a self-sustaining professional entity. Additionally, game play drastically changed. Approved rule changes included multiple substitutions and reduction to six players on the ice. With such a storied life, a simple posting can only highlight a few major events and aspects of hockey’s King.

Thomas Howard was player, coach, and fan of hockey. Although Tom played in college, he is better known as a Winnipeg Victoria Forward. His playing career peaked with winning the Stanley Cup. Although seemingly acquired by St. Paul hockey club in 1899, Tom signed a contract to coach at Yale.

In 1900, Tom started his coaching career. In a professional capacity, Tom coached at Yale for ten years, Columbia University, Yale, Dean of Hockey at Jamaica High School,  and was possibly considered for the general manager role for the New York Americans. However, it appears Tom’s love was always amateur hockey and returned to coach the sport time and time again.

Tom wasn’t just a player. He wasn’t just a coach. He was a fan of the game, especially when his sons played. Both of his sons joined the Navy Reserve and played for the Boston Yard team. Well, an account of a game between The Wanderers (of New York) and the Boston Yard Team highlighted how hockey was a family affair, even if they were in the stands. 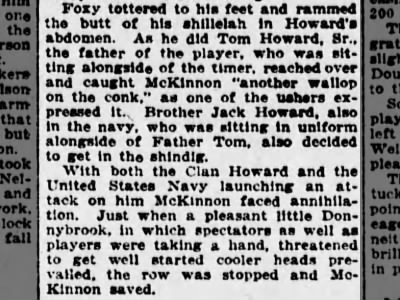 For each major change in hockey in the teens and twenties, people consulte Tom or his Almanac. Whether it was the transition from seven to six man squads or amateur over pros, newspapers sought Tom’s opinion. Additionally, Tom supported his wife as she coached the St. Nicholas Blues, a women’s hockey team.

Tom retires around 1927 and moves to Los Angeles with his son, Tom Jr. The last note in a long, storied life came from The Winnipeg Tribune: 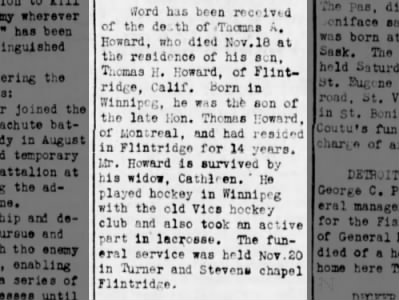 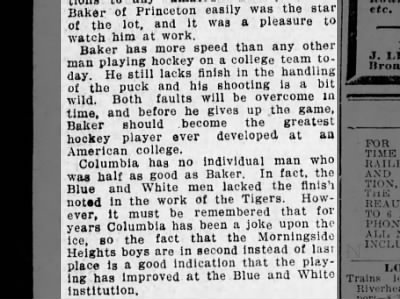 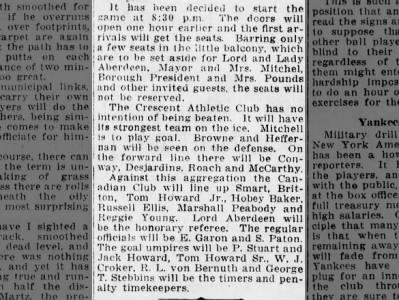