In December 1917, the First Naval District acquired John G. Hutchinson from a private life as a farm manager. By the end of the month, Jack joined the First Naval District hockey team and assisted them to their first exhibition win over the Boston-based Arena Hockey Club. As with many other John’s of the era, newsprint often referred to him as “Jack”. Knowing this helped tracked him to the start of his hockey playing in Arlington High School in 1908 and all the way through his Amherst (Massachusetts Agriculture). He played amateur hockey for Boston Athletic Association until at least 1926. When he transitioned to coaching, he earned a new nickname, the “old fox”, which carried him through the 1930s. However, Jack’s era was the era of amateur hockey. As amateur hockey diminished, Jack blended into the background as well.

The “old fox” was born in Arlington, Massachusetts on July 20, 1891. He played high school hockey during his last two years at Arlington High School. When he attended Massachusetts Agricultural College (UMass Amherst), he played from 1911 until 1914. During this period, John also spent time in the military achieving the rank of sergeant prior to enlisting in the Navy. John’s high school and college years prepared him well for the future.

John became a Naval Aviator too late in the war to see action. In a bit of unintentional foreshadowing, his Naval Air Station Bay Shore flight school record states:

The instructor who noted that John “handles men well” probably did not expect him to become a successful hockey coach.

John did not immediately transition into coaching. He played in the US Amateur Hockey Association with the Boston Athletic Association Unicorns until 1926. After a two year hiatus, he started managing BAA hockey. In 1931, he managed the “university club” team. With nearly ten years of coaching and management experience, the Amateur Athletic Union selected him to lead the 1939 United States’ hockey team. On the cusp of WWII, John took ten players to Switzerland. They walked away with Silver.

After 13 years at Cote and two months of retirement, John Hutchinson passed away at his son’s house on October 4, 1956. In a twist of bureaucratic fate, John lived on in Veteran’s Affairs records. In 1963, a John G. Hutchinson claimed VA benefits from the West Roxbury VA hospital. While it probably was a mix up between him and his son, a probable WWII veteran, these little mysteries of every day heroes can be misleading trails or tantalizing puzzle boxes. Those that survived John include Edith, a son, and two grandchildren. Much like John, they blended into the historical background of every day life. 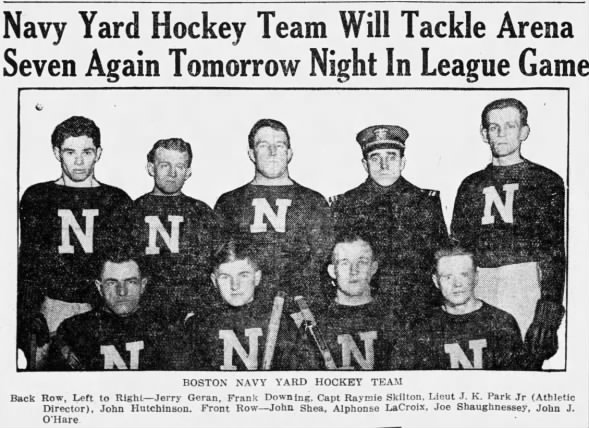 With a multitude of accomplishments, The Boston Globe and others bequeathed the mantle of “Father of Modern Hockey” to “Ralph” Winsor Jr.  To summarize, many credit Ralph with the modern hockey stick, skate curve, and effective use of substitution (prior to the on-the-fly line changes of today). In his role as the first American-born college hockey coach, Ralph devised a new tactic specifically to counter Hobey Baker. Ralph shifted the point and cover point to force the forwards to the boards. The tactic was moderately successful in stopping Hobey. To help visualize this shift:

Not only did Ralph modernize hockey, he supported his country in war and hockey.