In late 1917, George V. Brown added a new role to his accomplished list, Athletic Director of the First Naval District. Prior to this, he held the same position of the Boston Athletic Association (BAA). With the BAA, he started every Boston Marathon except for the first two. During his era, BAA teams won championships. He promoted sports whenever he got the chance. George was such a fixture in the BAA and Boston sports that the BAA suspended or refocused operations during 1918.

It is hard to tell who used whom. The U.S. Navy leveraged George’s sports promotions to increase its popularity. Quite possibly, the First Naval District hoped to gain an advantage in the regular sports competitions against Second Naval District (Newport, Rhode Island) and others. For George, he became responsible for Navy sports across most of New England.

Following the war, George returned the BAA back to its normal sports operations. A long time member of the U.S. Olympic Committee, George built the U.S. Olympic men’s hockey team for the first Winter Olympics in 1924. (NOTE: Cornelius Fellowes created the first Olympic men’s hockey team in 1920.) It was a silver medal team consisting of Herb Drury and Alphonse La Croix.

George also experienced change in hockey from the amateur to the professional. While George supported professional hockey, George believed in the amateur spirit. He tried several times to establish a new amateur league in the Boston after the break up of the US Amateur Hockey Association. In 1932, the Boston Globe commented about George’s efforts to “breathe new life into the amateur hockey corpse.” Despite a potentially 150 registered clubs with the Amateur Athletics Union (AAU), amateur hockey would never regain a prominent role. 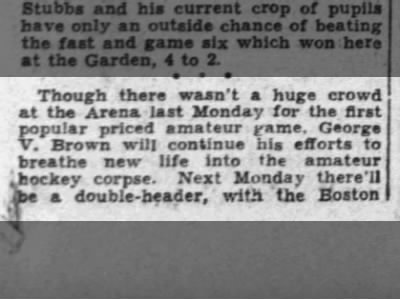